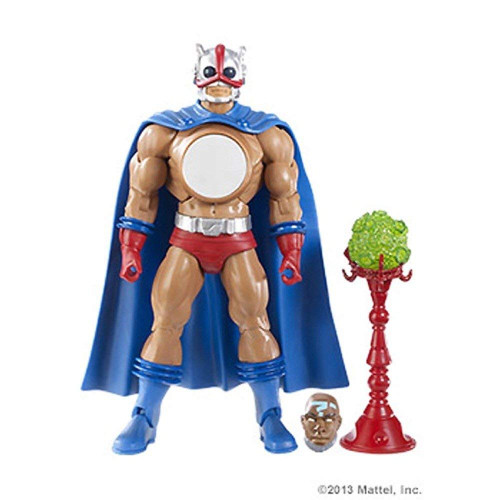 This powerful protector of the peace is happy to shed a little light on the situation... and then lay down the law, Cosmic Enforcer style! Fully articulated, this figure comes complete with a dark star energy meteor with non-removable stand. Also includes a fan-demanded alternate unmasked Zodak head! Strobo is the featured figure at various conventions during 2013. <br/>Strobo Bio<br/>Real Name: Gepher<br/>Chosen as Zodacs replacement in the Cosmic Enforcers, Strobo was tasked by the Overlords of Trolla to investigate his predecessors assassination on Eternia. Finding Jitsu ruling Snake Mountain and evil spreading across the land, Strobo carried out his Masters assignment by forcefully maintaining neutrality in He-Mans absence. He turned the tide at several battles, fighting both with, and sometimes against, the remaining Masters of the Universe. Strobo wears armor enhancements originally created by the scientists of Anwat Gar. His chest plate can project force fields and energy blasts